The company that makes one of the best portable soldering irons, the TS100, has recently released a new model, the TS-80! In this review we will take a look at the new features of the TS80, and whether it’s better than the TS100. 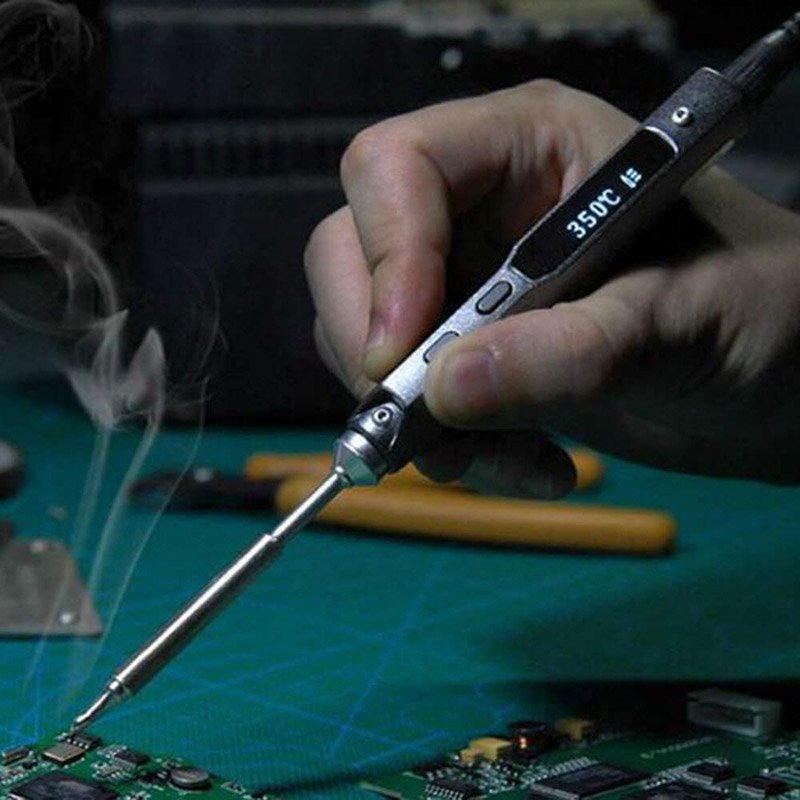 The Advantages of TS-80 Soldering Iron

Many people love the TS100 because of the small form factor and portability. What if I tell you that the TS80 is even smaller!

The TS-80 shell is made of anodized aluminium and feels to have better build quality over the TS100, which is just plastic. For this reason, the TS80 is actually heavier, at 35g, while the TS100 weighs only 31g, despite being bigger.

One of the biggest differences between the TS80 and TS100 is perhaps the input power.

The TS100 can be powered by a DC input voltage between 12V-24V, via a 5.5mm barrel connector. That’s probably the reason why the FPV and RC community love it so much, as you can simply use a 4S to 6S LiPo to power it. Very handy for field repairing too.

On the other hand, the TS80 uses a USB-C interface, and requires USB port with QC3.0 standard (quick charge). Basically, QC3.0 means a USB port is capable of supplying up to 2A at 9V for high power applications, like quick charging.

For this reason, it probably won’t work when you connect it to your computer. It will need some special power supply which i will talk about later in this post.

I did some testing, and actual soldering with both irons back to back, and see if I notice any difference. I was powering the TS100 with 24V, and set both irons to 400°C to ensure the test is fair.

I turned on both irons from room temperature, to see how long it would take to reach 400°C, and here is the result:

When building a quadcopter, the hardest part in soldering is probably the ground plane of a PDB! Because it’s basically just a massive piece of copper that requires a lot of heat.

Surprisingly, the difference isn’t really that obvious just based on my observations! Yes, it takes a second or two longer for the TS80 to melt the solder on the PDB, but it’s subtle.

To get a fuller picture of the performance, I used a power meter to get some more data.

I basically kept the tip of the iron on the ground plane of a PDB (basically a large piece of copper) with a good amount of solder for good contact for 5-6 seconds, and measured the power and temperature.

The TS80 was putting out 18W consistently, and the temperature drop was 40°C, to 360°C, which is fairly significant,

Interestingly, the TS100 only puts out 20W to 22W during the test, and the temperature drop was only 10°C to 390°C. The power peaked at 60W when I first power it up but quickly drops to around 20W again. Maybe it only uses higher power with high temperature drop.

This suggest the TS100 can put out more heat and more consistently than the TS80, and it also has a lot more headroom if more heat is required.

Yes, the TS80 is very nice, but there are areas the TS100 are doing better apart from heat performance.

Secondly, the maximum temperature you can set the TS80 to is 400°C, which is lower than the TS100’s 450°C with custom firmware.

Also I find the TS100 easier to adjust temperature by simply pressing the up and down buttons. With the TS80, you first have to go to the settings menu, then find the temperature option for adjustment… Not a deal breaker, but annoyance all the same.

Both TS100 and TS80 are high quality portable soldering irons, probably the best in the market right now. The decision really comes down to what features you are after.

I feel like the TS-80 is more intended for precision work and smaller solder joints where you don’t really need that huge amount of heat. But mind you, it’s still a very capable iron for soldering XT60, PDB and ESC’s in a quadcopter 🙂

The TS80 has excellent ergonomics, and the overall build quality is just so much nicer!

It’s a tough call, but I still find the TS100 a more versatile option for building RC models. It has higher power yet it’s a lot more affordable, and you can power it directly from LiPo batteries without any adapter.

But with an LiPo to USB adapter, the TS80 can be equally convenient.